Vancouver has always been a healing city for me. After my divorce in the Yukon, I moved to Vancouver and started a career as an opera singer. (See my book Aria: Song of Life for details of my adventures). After a few years, I moved back to Toronto and went to the university there. Then in 1985, after my darling daughter Carrie died, I moved out west again and started a life in Vancouver as a broadcaster. I think seeing the mountains and the sea everyday was palliative. Had it not been for my falling in love with Charles, I might still be living there. Back again to Toronto.

Now Charles and I have two sons and a daughter-in-law who live in Vancouver. We are drawn there by them and enjoy our visits with them, albeit short. After we left Tofino (see More Oh Canada blog), we landed in Vancouver and were picked up by Corby and Kate, married almost a year and expecting their first child. Yippee! 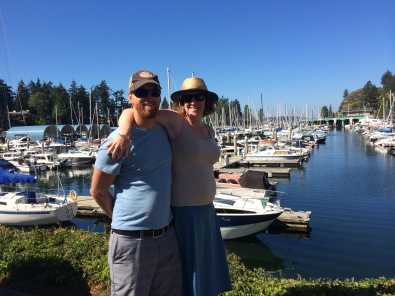 Corby and Kate with baby bump

They dropped us at our hotel, The Rosewood, formerly The Georgia, which is quite lovely, if impersonal. Memories abounded as I had spent many evenings at the old Georgia in the bar with opera buddies. The hotel now only bears a remote resemblance to the old Georgia. Our room in the ‘deluxe ‘category was nicely furnished, but a small coffee table in the centre made it challenging to move around without banging my legs, which I did more than once until I had it removed. The bathroom was very large with separate sinks, freestanding bathtub and self contained shower, all very luxurious.

The kids picked us up, Niels, our middle son, now joined in, and we went for lunch at a craft brewery called The Craft Beer Market in the Salt Building, a very impressive environment. The food was typical pub fare, fish tacos and poutine, delicious and fun. The guys had beers and they all seemed impressed with the variety and taste.

I then took Kate out for a shopping expedition and later met Charles back at the hotel. I went for a swim in the gorgeous pool, while Charles did his email catch up.

Normally, I book all the restaurants when we travel, but this time I gave Corby the job, which he relished. Food is very important to me, cooking, entertaining and sharing a meal with friends and family is one of my favourite activities. When the boys were growing up our kitchen was the hub of the household. We went through tons of food as boys can really put it away. They ate everything that was placed in front of them, no fussy eaters in the Petersen clan. Niels, grew up to be a very fine cook, with more patience than I to chop and dice and prep complex dishes. I mention this because we also liked eating out and trying new food and exotic fare. So I knew that Corby would come up with some interesting places to eat.

Wildebeest was the dinner choice for Saturday night. This restaurant that considers itself ‘meat centric’ is in the downtown east side. A long narrow room with the kitchen in the centre, it is bustling, noisy and the table we were at enhanced the communal feeling of the place. Sharing dishes is encouraged, however, Charles wanted to eat something fishy on his own, as we were on the west coast. but I could see him enviously eyeing some of our choices like the of pork ribs and seared elk.  It was all very tasty, although the service was spotty. When I heard the name I thought of the animal, and especially so as we had been on Safari this past January, and saw a herd of wildebeest. I will write about that incredible trip in a future blog.

Sunday morning, we were picked up early and driven to a charming breakfast restaurant in West Vancouver on Marine Drive in the Dundarve area, called The Bake House. The food was scrumptious. I chose the Dogs Breakfast, scrambled eggs, turkey sausage and some delicious pastry. Yum. Then we headed off to a marina and went for a day’s sailing in a  boat borrowed from of one of Corby and Kate’s friends. Corby is an excellent sailor, as is his father. In fact all the Petersen boys are accomplished sailors. Perhaps a future blog will be about our family sailing adventure two summers ago, also on the west coast.

It was a glorious sunny day and we headed to Bowen Island, a perfect distance for a short day sail. There is absolutely nothing as beautiful as sailing with the mountains surrounding the water, the breeze, the conversation, and the mellowness. Wonderful! We disembarked in Snug Cove, and walked up the hill to the little village on a quest for some ice cream, which we found at a funky little coffee shop.

West Vancouver from the water

After a lovely sail back, we changed and all met at a terrific restaurant called Salvio Volpe for an early dinner. This osteria had absolutely wonderful, creative, unique food. We did share all; Niels was along so we were five. Each of us chose one item and then we added a few and a feast ensued. We sat in a cozy booth and could smell the wood burning fire. The restaurant, in the Mount Pleasant area, is on Kingsway near 15th, not far from where Corby and Kate live. Then we headed to Kitsilano,my old stomping grounds,and went to Bard on the Beach for some theatre.

Famous tents of Bard on the Beach

The shows, mostly Shakespeare with some opera concerts thrown in,  are performed in a tent. We saw a very good Othello, set at the end of the American Civil War. This seemed to work  quite well as a time frame. The actors were all excellent, particularly Kayvon Kelly, as the cunning Iago. I understand that more performances have been added until Sept. 20, still time to catch it if you are on the west coast. Going to Bard on the Beach was a great way to end a family weekend in Vancouver after a dazzling trip to Tofino (see More Oh Canada).

Back to the hotel for a nightcap, and then to Toronto the next morning. I am already looking forward to our visit in December when a new Petersen will be added to our small clan.

Till the next time..

One thought on “Vancouver weekend”